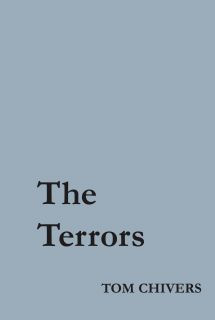 Tom Chivers is a poet based in London, who has just published a pamphlet of poem-emails entitled THE TERRORS. To give you a flavour of his content, here's the short preface:

What follows is a sequence of imagined emails sent from the author to inmates at London's Newgate Prison incarcerated between roughly 1700 and 1760. All mistakes, typos and anachronisms are deliberate.

Tom Chivers promises - and delivers - anachronisms in these well-presented 30-odd pages of poems - poem-emails, prose-poems, email-musings - with an urban twist well-suited to such disturbing subject matter. For instance, in an email to Babs_Spencer@yahoo.co.uk, Chivers addresses the unfortunate Barbara, who appears to have been imprisoned for forgery, as though they are personal friends. 'Thank god you were throttled before you were burnt', he writes, then leaps straight into another stanza: 'The burger vans hum as I wait for the nightbus, onions caramelising on the grill, faggots and all.'

This is contemporary elegy, then, for the long-dead, the unknown, many of them victims of a clumsy, unjust and barbaric legal system.

Geoffrey Hill in his Mercian Hymns phase is, surely, an influence in these poems, structurally at least, if not in tone as well. This is from one of several emails to William Dodd

I snared the gaping crowd, Will; told Akerman you once danc'd into the living grave wherin we're food for worms. I'd love to see your homely porter, clad in bespoke skin of wolsey grey; strange choirs, guttural outpourings.

I'm what you'd call a fellow traveller; terrestrial stranger with my twin-pack scriptures, ghostly doctrine tagged along the walls. Watch for the pattern and the source, you said.

The pattern: infamy!
The source: infamy!

But not all these email-poems run along such expansive, discursive lines. Some are elegant with impressive one-liners - 'The Chinese say a person with a bad name is already half-hanged' - while others try a different tack, short clauses and place names run together in mini-sentences, creating a breathless, accusatory charge into the past:

Hooded in a whimple. Skirts up to here. It was you, wasn't it?
Gun Street. Spitalfields. Drab or tom.
Findy sides open to the fog. Bundle of kid.

Even though some of these poems are difficult to read, and must have been even worse to write, Tom Chivers does not shy away from the unsettling or the genuinely horrific detail in these quasi-historical accounts; indeed, his outraged sense of injustice permeates THE TERRORS. Here are the opening lines of 'To: Elizabeth Brownrigg/Subject: Murder by inches':

1. The subject is tied up naked, beaten with a hearth-broom, a horsewhip, or a cane, til she is speechless.

Some of the rest of this poem is so horrific, I don't feel able to quote it here. But it conveys, swiftly and eloquently, the atmosphere of Newgate Prison in the eighteenth century, or how we, looking back on such times from the present, can only believe or fear it must have been for the inmates.

Nine Arches Press is to be congratulated for publishing this short collection by Tom Chivers, which is both innovative and disturbing, and which gives a voice to the voiceless, albeit an imagined, anachronistic one. I was extremely pleased to be present at the launch a few weeks ago in London, and to be able to read alongside Tom. Hearing his introductions, and the poems themselves, left me keen to review such a fascinating, experimental collection.

If I had one minor criticism to make, it would be that, on reading these poems, I felt curious to know more about the people to whom they were addressed, including crimes they had been accused of and how they were sentenced. But it's only a minor point, and perhaps a list in an appendix could be added in a later edition.

THE TERRORS is a bold, dark, and deeply unsettling collection which introduces a strong new poetic voice in Tom Chivers. You can buy the book online from Nine Arches Press via Throckmortons bookshop (which will directly support this bold new publishing house).

There is also a short poetry film by Tom Chivers reading from THE TERRORS on location at Newgate, available here.
Posted by Jane Holland at 12:31 PM

Thank you for your review Jane - I'm really delighted you enjoyed it, even if there were parts where enjoyment is not really the right word... It's interesting the whole notes/no notes question - I did think about it, whether I wanted to give readers more information, at least a lead to go on... I think perhaps in retrospect one page of very simple notes may have been in order, but it's always hard to tell whether that will actually detract from the poetry as poetry.

Your Geoffrey Hill point is right too, I think. I think Mercian Hymns is bloody brilliant and if it's not a direct influence (it's not), it's certainly somewhere there, deep inside.

Thank you again for reading with me at the Market Trader. Top night. And my uncle, who doesn't usually like poetry, bought your book. :-)

Yes, good old uncle of Tom. Hope my book hasn't put him off poetry for life though ... :0

I love notes in poetry books. There are so many things that form the background to poems, motives, histories, allusions, personal references etc. and although I have no argument with the concept that a poem needs to work alone, without explanation, I do think that explanatory notes can make a poem that might otherwise have remained forver opaque and mysterious far more accessible and - to my mind at least - more enjoyable.

I sometimes fear that poems are too often regarded like the Emperor's New Clothes. If we point and say 'Don't know what you're talking about there, mate', we're afraid people will consider us stupid, uneducated, and basically missing the point that everyone else grasped on a first reading.

But sometimes we really do need to point and ask questions, in order to fully enjoy a piece of writing, and I don't think there's any shame in that and no disrespect intended to either poem or poet (or reader, for that matter).

Oh, I intended nothing but disrespect for the reader! :)

But yes, I think your Emperor's New Clothes analogy is very true. I relate to that strongly.

This has finally convinced me to buy the book, despite the insane £4 p&p. I'm sure it will be worth the empty pockets...

Dan, poppet, you should have said. If you haven't forked out for the p&p yet, give me the dosh when we next see each other on campus and I'll bring you a copy by hand.

Ach, dinnae worry yerself. After all, the student loan needs to go on something *other* than just the contents of the pub. My copy's actually just arrived in the post. It's really nice as an object - I love the illustrations and the quality of paper stock. I'll report again when I've actually read it, though.

Published Autumn 2012
That's the kind of poet Jane Holland is, a superb thinker-ahead, a person who always knows where the poem is going to go, even before the poem has been written; and that's not in any reductive way, that's in a way that makes you raise your fist and go YESSSS!'

Stories for Kindle or your computer, written by an eight year old.
"If Jane Holland didn't exist it would be necessary for us to invent her."

My first poetry collection (Bloodaxe, 1996) out of print but still available from me. Alternatively a revised Second Edition exists as an ebook on Amazon entitled "Disreputable".
'Jane Holland's Boudicca & Co is a book of adventurous, resonant inventions. As the title suggests, it offers a new view from the interior - of both country and psyche - in which history and geography are co-opted in effortless interplay. It's a work of synthesis, and of poetic and emotional maturity, in which Holland emerges as a true craftswoman, a supple and graceful thinker with an effortless grasp of line, at the heart of the English lyric tradition.'

Create Your Badge
On Warwick Castle: a "modernist pièce de résistance" (David Morley) and "one of the more ambitious works of public poetry generated through a local laureateship" (David Floyd, Sphinx 10). Available to buy from Amazon and Nine Arches Press.

I was a world-ranked snooker player in a former incarnation. I still occasionally play pro 9-ball pool.
'Extremism was the last gasp of the Modernist movement ... The stakes now are smaller and poetry is milder, less adventurous.'

Photograph by Roly Drower
'Sleeping with your own muse is an almost unpardonable breach of male literary protocol; but to sleep with a friend's, and tell him about it, is to do him the greatest favour as an artist.'