A Short Season of Other Poets: Matt Merritt 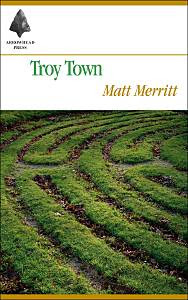 The Memory Of Water

It is not in the same way,
say, that those essential oils, diluted a thousand times over,
defied all common sense to do what science couldn’t

but maybe how
the Laphroaig clouds and piques, to recall the snap and lash
of the Atlantic with the least splash from the jug.

Tonight rain slathers the pavement
while you dissolve into distance, the evening suddenly
liquid, each huge drop hitting the ground

with the sound of a half-kiss, and it’s you who lingers
on the lips, almost too faint to place, then a slow, insistent heat
and the salt tang of deep waters.

"I finally wrote this a couple of years ago, after a June deluge of Biblical proportions, but in common with a few other poems in Troy Town, it had been a long, long time in the making - since the very rainy summer (is there any other kind now?) of 1996. I like to think that it was just taking its time to mature, a bit like the Laphroaig it mentions, but then that's the perfect excuse for working at snail's pace."

Troy Town is published by Arrowhead, and is a 76-page hardback costing £8.99. The book is available at Arrowhead Press or direct from Matt Merritt (at £8), through his excellent blog, Polyolbion.

Email ThisBlogThis!Share to TwitterShare to FacebookShare to Pinterest
Labels: a short season of other poets, matt merritt

Lovely, Matt. And what a great title.

You should be able to reduce the size by highlighting the section you want to be smaller and then selecting the size you want in the drop-down menu to the immediate right of the fonts menu in the post editor.

I don't think I did that right. Now EVERYTHING is smaller. Including my ego.

Ah, finally worked it out. That's much better.

Now I'll be able to deal with Claire Crowther's poem, which is a bit tricky formatting-wise.

That was very good indeed.

Thanks very much for posting the poem, Jane, and for the kind comments everyone.

This is a beautiful poem, actually. I was so worried about getting the formatting right that I didn't stop and take it in properly. Now I'm very glad indeed to have it on Raw Light. And it may have taken a few years to perfect, but it's certainly matured well along the way. Measured, thoughtful, resonant ... beautiful.

A great poem - and what a title. I enjoyed it.

That last stanza does it for me. Beautiful you, just beautiful.