I'm thrilled to announce the publication today of FLASH BANG: my New and Selected Poems 1996-2014. Almost twenty years in the making!

I've been hanging on for the past few years, wondering what to do about a Selected, which publisher to approach. But my experience with self-publishing - and my disposition in general! - has made this the best choice for me at the moment, as I explain in my previous post.

I hope those who have enjoyed my writing in the past will take this opportunity to pick up, at a very reasonable price, a selection of my best work to date, along with some brand-new poems. It's been a big step for me, publishing this selection of old and new poems, and I would be extremely pleased if some of you at least wish to come along on the journey.

All profits to the author!

Previously unpublished work includes extracts from: 'Gawain', a new version from the Middle English poem; 'Hango Hill: Poems of Illiam Dhone (Manx Martyr)'; 'The Dream of the Cross', translated from the Anglo-Saxon; plus a clutch of new poems.

‘Extremely powerful and varied … Holland has both the clarity for the reader and the mastery of language to say what she means in a way that makes the brain tingle with both shock and pleasure … This collection is outstanding.’
ANGELA TOPPING, Stride Magazine

'I reached the Boudicca sequence, and everything went electric … There’s a touch of Vicki Feaver about the violence and the cool delight in blood and innards, but the work is quite distinctive. I was dashing from poem to poem, completely compelled.'
HELENA NELSON, Ambit

'a true craftswoman, a supple and graceful thinker with an effortless grasp of line, at the heart of the English lyric tradition.'
FIONA SAMPSON, former Editor of Poetry Review

Available as an ebook (can be read with free Kindle software on Kindles, iPads, iPhones and most other devices and computers) at: 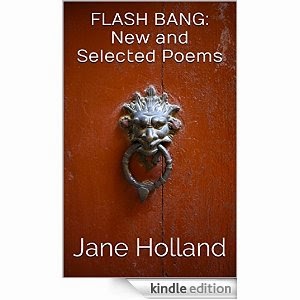 Posted by Jane Holland at 9:00 AM 4 comments: Links to this post

Apart from being well-respected poets, they all self-published their poetry at one stage or another.

Many readers of contemporary poetry - almost invariably poets or writers themselves these days - assume that poetry which is self-published was not good enough to stand the rigour of editorial choice. They imagine such books must issue from self-indulgent or desperate souls whose last resort is to self-publish their dubious poems, unable to find a readership elsewhere.

But of course this is no longer the case. And probably never was.

Yet the idea persists that self-published poetry is not worth the same money you might happily fork out for a traditionally published book. After all, how are you supposed to know if it is any good? You may be completely taken in by a nice cover or interesting blurb, or another poet's recommendation, and spend your hard-earned cash on rubbish.

Whereas everyone knows that traditionally published poetry, the sort that is shortlisted for prizes and published by sober and respectable places like Faber or Picador, for example, can only ever be excellent. Perhaps even brilliant. And certainly worth paying for. Otherwise why would those clever editors, with their flair and good taste in poetry, have selected them for publication above all others?

Besides, why would any poet whose work was good enough to be traditionally published actually choose to self-publish?

Well, there are many reasons. One is that it is pointless to send poetry to traditional publishers in the sure knowledge that you do not write work which will fit into their very list. I am bored by the seemingly endless struggle to fit into boxes designed to showcase one type of work and exclude all others, work which is increasingly bloodless, uninteresting and limited. This is not about a lack of talent - though for some, that is indeed the unfortunate reason they have not found favour with mainstream publishers - but a total failure of interest in what is currently considered 'good' poetry. I used to enjoy that struggle to fit in, and engaged with much highly praised contemporary work, hoping to find something there to excite me. But no longer.

Contemporary British poetry feels horribly sterile at the moment, at least in the higher echelons. It's an exercise in stifling personality and freedom, and keeping everything tight and restrained. The adventure of self-publishing, of striking out on your own and making public precisely what you wish to make public, without reference to an editor whose taste almost certainly will not match your own, and whose suggestions you will feel obliged to follow - this is perhaps one of the last great adventures left to us in poetry.

Of course, along with self-publishing comes the necessary abandonment of any hope that you will be noticed by critics or recognised for your work. That is a tricky one, because every poet has an ego. But it's an acknowledgement that some goals are simply unattainable. A wide readership is out of my reach now. But I can still rebel and enjoy kicking over the traces!

So maybe only a small handful of people will buy my self-published book. But they will at least be readers who have gone out of their way to find it and actively wish to read my work. They will not have bought it because of who the publisher is, or because the poet is well-known or just appeared at a big festival, so 'must be good'. These are intelligent, discerning poetry readers who wish to engage with work that isn't any of those worthy things, but which might still prove interesting for any number of reasons.

I am not well-heeled enough to pay for a paperback copy of my self-published poetry. So my self-published work is only on Kindle or PDF files. But since I am a firm believer in ebooks, and in the artistic purity and freedom of self-publishing on the whole, this is not something that bothers me. It also means I can offer most of my publications at lower prices than you would expect from large publishers.

My New & Selected Poems is out this month in a collection available only on Kindle. It's called FLASH BANG.

It contains generous extracts from four of my five traditional poetry publications to date (excluding The Lament of the Wanderer), plus extracts from unpublished long poems and sequences, and a selection of new individual poems.

If nothing else, I hope it will be interesting for readers to contrast self-published work like this with poetry you may also be reading from traditional poetry publishers. Take a chance!

Posted by Jane Holland at 10:30 AM 3 comments: Links to this post

I edited Horizon Review from 2008-10, a lively online arts magazine owned by Salt Publishing. We published reviews, articles, comment, publishing news, poetry and short fiction in an eclectic tangle, big names and new writers in together.

I left the post when my own writing commitments grew too much, and the magazine was later edited by Katy Evans-Bush.

The magazine folded a few years later, and sadly has since disappeared from the internet. In the interests of 'rescuing' some of the fine contributions to that magazine, I have been given permission to republish a selection here at Raw Light.

If you had work in Horizon Review - either under my editorship or Katy Evans-Bush's - and would like to see it archived here, please get in touch. I do not have access to work featured in later editions of the magazine, so you may need to send the files as well.

The work will appear in no particular order. It is unlikely dates of original publication will be included, as there is little access to records - apart from the odd cached post.

This is an on ongoing project, heavily reliant on tracking down individual contributors in order to seek permission to republish their work, so it may take place over several years. Do let people know about this project if you think they may have been involved in the magazine.

I am hoping to include poetry and fiction as well as articles and reviews, but obviously it will depend on what people are willing for me to republish. Please note, no one's work will be republished without permission. There are no fees for republishing, the archive project is a non-profit-making attempt to establish at least a partial record of what was in the magazine. But those who do choose to be republished may wish to update their bios and photos at the same time, i.e. promoting newer work.

This project's success will depend on people sharing this information and helping me out with locating writers and seeking permissions. So thanks in advance!